This is an interesting study by The Economist and resonates to our research on newsproviders competing in contests. While these authors argue that it is random things that get important topics emerge from the chaos (e.g. the personality of the person posting) much like it is the case for entertainment content in general, we argue that it is the contest nature of competition between suppliers of "hot news" that makes topics emerge in a random fashion. What is clear from both processes is that there is much less consensus on what the "agenda" is, or should be and that may or may not be good for democracy. The debate just gets started.....
Posted by Miklos at 09:07 6 comments:

Germany has just accused Facebook of abusing its market dominance by somehow 'forcing' consumers to accept its data usage terms. The FT reports that the German competition watchdog is launching an investigation into the matter. I can definitely see a case for privacy concerns in the context of Facebook (and other websites that use consumer data for selling advertising) but connecting this issue to anti-competitive behavior and market dominance is a stretch. Is the argument that "because of its market dominance, consumers don't have a choice but to share their private data with Facebook"? This is not really the case. Rather the issue is that it is hard for consumers to figure out the correct privacy settings. Unfortunately, the authorities don't seem to be very clear about their reasoning.
Posted by Miklos at 06:04 4 comments:

And another mogul - from the same country 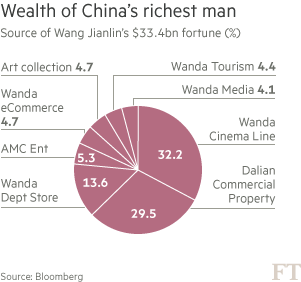 Wang Jianlin, China's richest man has been reported to acquire a controlling stake in Legendary Entertainment, one of the large Hollywood studios responsible for the recent movie hits Godzilla and Jurassic World. The FT article reporting the transaction talks of a $3.5 billion deal, the biggest ever in China, in film. Mr Wang's conglomerate, the Wanda group is quite diversified with a large enough media chunk that includes content creation packaging and distribution (Wanda also owns AMC Theater chain in the US, and has important sport assets among others). And his ambitions will probably not end with this latest deal. Clearly, Mr. Jianlin wants to be well-positioned to take advantage of the fastest growing media market in the world. According to a recent Economist article he is at the right place.
Posted by Miklos at 11:59 3 comments:

After becoming a billionnaire from his e-commerce site, Alibaba, Jack Ma, moves on to become a media mogul (see The Economist's article here). In many ways this is not too surprising. Alibaba's origins can be seen as copying Amazon (although arguably, by now, it is quite different), so maybe Mr. Ma is following Jeff Bezos' footsteps, heavily investing in media assets of 'all sorts'. The emphasis, of course, is on "all sorts" as it doesn't look like there are a lot of synergies between the various media businesses that he bought a controlling stake in. But maybe this doesn't matter.... If he looks for inspiration in the West, he will find plenty of large diversified media companies considered to be "successful".
Posted by Miklos at 11:43 3 comments:

WeChat's diverse use in China

WeChat, the Chinese messaging app keeps pushing the concept of social media further and further. Originally a product of Tencent designed to migrate the social network to mobile, it has eclipsed its internal competitor (the Tencent app) as well as its PC-based parent and has become a full fledged mobile social network. What is remarkable though is that - in contrast to western social media, that are still largely just entertainment platforms - WeChat integrates virtually all Internet applications, from mobile payment, to online shopping and services including even some pretty sophisticated banking products. A good summary of the crazy things that can be done on WeChat can be found here. The list drives home the point that long gone are the days when Chinese social media is just a copy of their western equivalents.
Posted by Miklos at 10:19 3 comments:

Hanna Halaburda and I have written a new book about digital currencies - it will be out at the beginning of 2016. Yes, we do talk about Bitcoin (and its many many competitors) but the book also covers, what we call "platform-based" currencies: currencies introduced and centrally managed by large digital platforms (social networks, retail platforms like Amazon or video game platforms). These have exploded in recent years and we believe that this trend will just accelerate. What might be its implications? This is what we try to answer in the book.

And now we also have a facebook page. Check it out here.

Net neutraility in the US and the EU

Europe has just proposed its own version of net neutrality law and critics are already tearing it apart. This article from The Economist compares it to the US version and broadly concludes that the European law is looser on net neutrality than the US, which will result in less innovation on the Internet. The article claims that the main reason for this difference between the two continents comes from the fact that in Europe, the balance of lobbying power is in favour of the large infrastructure (telco) companies instead of Internet platforms. In fact, European telcos - many of which are close to the government it is claimed - find eager listeners in regulatory bodies who are tired to witness the crushing success of American Internet giants on their continent.

This view is quite superficial. First of all, I don't think that there is such a large difference across the two continents in their approaches to net neutrality: there are loopholes large enough in both laws as well as many uncertainties concerning details of implementation - The Economist ends their analysis acknowledging that the US law faces many hurdles still. Second, it is not clear that European telcos have more leverage with their governments than say AT&T (which has just managed to reassemble itself to control a large chunk of digital traffic), or say, Comcast and some other large cable networks. Third, expensive infrastructure for consumers is just as much a roadblock to innovation on the Internet than net neutrality - in fact, arguably more so. European broadband costs are much lower than equivalent service costs in the US and as a result Internet usage is way ahead in Europe compared to the US. Fourth, net neutrality is not an unambiguous good thing so that more of it is automatically better. Network management is complex and priority needs to be provided to some content to avoid congestion - finding the right balance is extremely complex. While some bandwidth needs to be guaranteed to poor new application providers, it makes sense for intense users to pay more for the infrastructure used.

Innovation on the Internet has been dismal in Europe when compared to the US. This however, does not come from overregulation of the Internet but much more from the lack of appropriate financial infrastructure and the lack an investment friendly economic environment. Indeed, the gap in innovation across the two continents is also present in other industries, not just technology.
Posted by Miklos at 13:16 5 comments: